10 Tips on Staging Your Home to Sell

It doesn't take long for a prospective buyer to form an opinion about your house. Here's how you can tilt the odds in your favor by making your home appeal to the widest clientele possible. 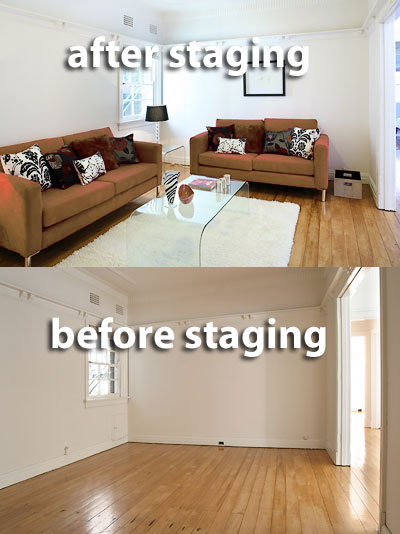 You don't have much time.
Prospective home buyers form an opinion about the home you're selling in 15 seconds, by one estimate. And the clock starts ticking at the curb -- even before the home buyers get in the house. So how do you tilt the playing field in your favor? Increasingly, it's by staging your home.

Generally speaking, staging means making your home as appealing as possible, as quickly as possible, to the broadest clientele you can.

"In this market now, staging is desperately needed even more so, because it's so competitive," says Julie Dana, who runs The Home Stylist in Buffalo, N.Y., and who co-authored a book on staging.

In fact, Barb Schwarz of StagedHomes.com estimates that about one in four homes nationwide are now staged. So if you're not doing it, you may be at a disadvantage.

There are techniques to pulling this off -- some of them obvious, and some not so apparent. We polled the experts to get some of their top tips.

Here's what you need to understand about staging: "How you decorate to live in your house and how you decorate to sell your house are very different," explains Dana. Decorating implies adding. But staging is all about paring away personal decoration. Why? Because the driving idea behind staging is to let people imagine themselves living in your home, leading the good life. It's NOT about you and your stuff and your taste.

Nearly everything in staging sprouts from this basic idea.

1. Declutter. This is staging's golden rule. Clutter isn't just your average mess. Clutter is the so-called "visual dandruff" -- newspapers, mail, laundry, knickknacks -- that accumulates in a house that's well-lived-in. "The way that we kind of word it is that clutter eats up equity," says Wendy Van Cott Speight, owner of DECO-The Design Company in Bloomington, Ill. "If there's a bookshelf, I'm going to pack up two-thirds of those books and put them away and basically just arrange the rest in nice little displays."

This mantra also applies to furniture. A good rule of thumb is that a staged living room should have half of its furniture removed, to give a better sense of spaciousness and movement, says Van Cott Speight. What to do with it? You're moving, so pull a storage pod into the driveway and pack it up.

And when you do rearrange, make sure you highlight the focal point of the room, such as arranging chairs around a fireplace in an inviting, approachable scene, experts say.

Streamline the kitchen counters, too, says Sally Ann Possidente-Ruiz, a real-estate agent and staging professional who works mostly in New York’s Westchester and Putnam counties. "I'll give you a coffeepot. But put away the toaster and the toaster oven. You don't need it. You want sleek, clean lines. And you want them to say, 'Wow, look at the counter space.' "

2. Be a neat freak. This may go without saying, but the only thing as important as decluttering is having an immaculate house. That means steam-cleaning the carpets. Walls should be painted if needed. Pressure-washing outdoor decks and aluminum siding can do wonders for a home's first impression and boost a home's value, Dana says. One place homeowners can never clean enough is the bathroom, stagers say. Toss out that bath mat; it's probably a wreck. Declutter it ruthlessly, add a few candles, and hide all but one or two of the shampoo bottles, says Possidente-Ruiz.

3. Hide the sword collection. Another name sometimes used for staging is "blanding," and there's a reason for it: Now's the time to sell your space, not your personal tastes, because you never know what may turn off would-be buyers. "It's got to appeal to everyone," says Peggy Selinger-Eaton, one of the founders of professional staging and author of "Staging your Home for Profit," as well as founder the Web site "Peggy's Corner."

Remove family photos and religious items. Possidente-Ruiz remembers one Jewish home buyer who visited a condo and came away with little impression except of the crucifixes and pictures of the owner's First Communion that were inside. He bought a condo in the same complex that needed more work, she says.

Van Cott Speight recalls a different challenge with a house: "They had themed bedrooms -- one room was all clowns, another was superheroes." Were there kids? "Actually, there weren't," she says. That superhero-themed room was the master bedroom. She helped them pack up all that and repainted the master bedroom with "grown-up" colors to appeal to a broader audience. "In order to appeal to a broad audience, you’ve got to take that away, or it will not sell," she says.

4. Search and destroy odors. A popular saying coined by Schwarz of StagedHomes.com is, "If you can smell it, we can't sell it." A house that smells odd to a prospective homeowner -- whether because of a cat's litter box, or dogs, or exotic food -- can easily be a deal breaker. Ask someone you trust to give you an honest answer whether your home has a distinct odor. Then tackle the problem, by steam-cleaning the carpets and furniture, moving litter boxes elsewhere, scrubbing the kitchen, etc. Finally, don't try to mask anything with potpourri, or by baking cookies. Just open windows a few minutes before a showing to let in fresh air.

5. Spend the money where it matters: out front. Use your time and money wisely. Studies show that the front porch is where prospective home buyers spend the most time, as they wait for the door to be unlocked. "A lot of times I'll suggest painting the front door," says Selinger-Eaton. She also often suggests replacing the brass light fixtures on the front porch if they're too badly tarnished, or at least painting them. "Right now I'm doing a lot of black," she says. Certified master stager Barie Pinnell, president of WRE Interiors in Dallas, recommends placing planters on each side of the door, as well, with flowers in vibrant colors that excite the eye. (She often recommends fuchsia and white.)

And to make sure all this work isn't for naught, be sure your real-estate agent's lockbox is on your front door. Some agents will put it on a side door or back door. But your front door and entryway usually make the best impression. Make home buyers experience your house the way you want them to.

Once inside, the foyer or entryway -- if you have one -- is where people will linger the longest in the house, say the pros. "Wow them now!" writes Dana. Make sure the paint is a creamy neutral and fresh, and the flooring looks great. All you need for décor is a thin table, a lamp, a vase of fresh flowers. "If you have a limited budget and can only afford to replace the entryway flooring or the guest bedroom carpeting, choose the foyer. It is the first impression," write Dana and Turner.

6. Use fresh flowers. Throughout the house. Always fresh. Only fresh.

7. Make it current. As much as possible, you want your home to give off a feeling of being up-to-date, trendy even -- regardless of how long it's been since you've bought furniture. But how do you do that? Sometimes professional stagers bring in rented furniture and lamps to impart a better vibe; the staging of multimillion-dollar homes can even involve bringing in "rental" artwork from museums. You can get some of the same effect, though, just by paring down your belongings and looking at what's current these days.

Pick up magazines such as Domino, InStyle and Better Homes and Gardens to get ideas, advise Dana and Turner. Then pick and choose your furniture, and camouflage accordingly, if necessary. For example, what's in today is a more streamlined, clean look; the so-called "lumpy/bumpy" look is out. What to do with that puffy loveseat? Toss a slipcover over it to give it a sleeker appearance. Got a particularly ugly couch? A few big, well-placed cushions from Target can distract the eye and hide it in a pinch, says Selinger-Eaton.

Consider this cautionary tale: A man was selling his home in an exclusive gated community in Danville, Calif., for $2.7 million. But there was a problem, says Selinger-Eaton: While the house had an East Coast look -- yellow, with a big, white porch -- inside the home was festooned with lots of very heavy, ornate Italian drapes in white with bright turquoise. Despite Selinger-Eaton's prompting, the owner was committed to keeping the drapes up. Nine months later, the house remained unsold. The homeowner hired a new broker who agreed to take on the house only if the man did whatever Selinger-Eaton said. "He took the drapes down and the house sold in seven days," she recalls.

8. Think spacious. People often move because they want more room, so make your house feel as spacious as possible. "Closets should be half full, and you should be able to see the bottom of the closet," says author Dana. Show people a jam-packed closet, and they'll think it's too small for them, too.

Similarly, bedrooms should contain only a bed, nightstand and dresser -- or perhaps a comfy reading chair in the master bedroom. (Banish that StairMaster to the basement.) Want to make the master bedroom feel even larger? Swap out the king-size bed for a queen-size bed, Pinnell says.

Another tip: Stagers used to push all the furniture to the walls to try to make a room feel bigger. Today, Selinger-Eaton says to pull furniture two or three inches out from the walls. When possible, allow the corners of a room to be visible.

9. Think vignettes. Vignettes are groupings of accessories, usually in threes. "It could be three pieces of art on the wall; it also could be candlesticks, something tall, medium and short," says Pinnell. "It's about shapes and color," she says of the vignettes, which help draw the visitor through the room and make the room visually interesting. "I call them eye candy."

10. Lighten up. "You want as much light to come in as possible," says Possidente-Ruiz. Remove unneeded blinds. "If there's drapery, I try to make it as sheer as possible, or pull it to the side," she says. "You want people to come in and say, 'I could live here. It's nice and bright.'

Log in to see your saved listings or edit your searches:

No account? Sign up now to save searches, listings, and get tailored listing notifications. It's free, opt-out anytime.

Let us help you find your new home.